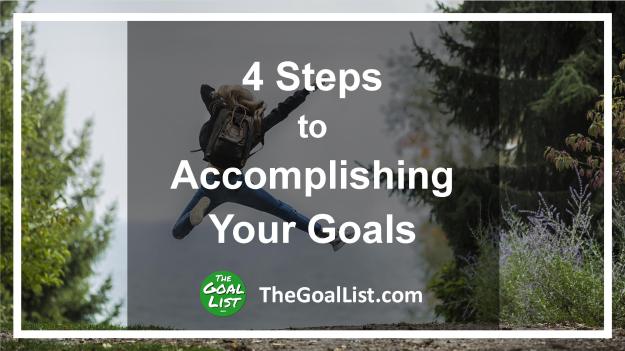 This is part of the 4 Steps to Accomplishing Your Goals series, a walk-through of the process I use to accomplish many things throughout the year. I’m also highlighting stories from people who’ve accomplished big goals in their life or business.

Today, Adam Luff, a freelance screenwriter from the UK, gives us an update on his life since his earlier interview. In the last five years, he’s built up film credits in writing, directing, producing, and editing, and in 2016 really focused on getting into the film world. Adam shares his reflections on this goal, tells us his key to success, and lets us in on his direction for the year ahead.

Check out the posts in the series to read more about clarifying your goal or celebrating success, and be sure to leave a comment about your experience.

The four steps each also have worksheets that help you walk through this process. If you want them, be sure to answer Yes!! on that section on the Insiders signup form (if you’re already signed up, you can update your profile by giving the same email you used before).

Soon after our previous interview for The Goal List, I began submitting my work to script competitions and film festivals. I wanted to get out in the film world and I hadn’t really been to many festivals and networking events, so that became my priority for 2016.

Fortunately, 2016 started off well with some official selections. 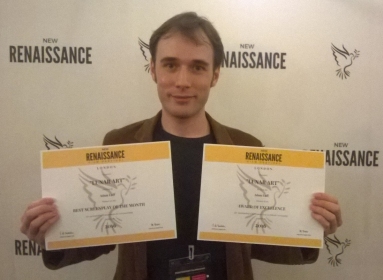 For Lunar Art, a short script I wrote involving the beauty of art and value of emotions with a side story involving immigration, achievements include:

Now I’m hoping to pitch it to production companies and possibly make it into an animated film.

I’ve earned other festival achievements this past year for Hat Trick (2012), a silent movie homage I wrote, directed, and starred in back when I was living in San Francisco. 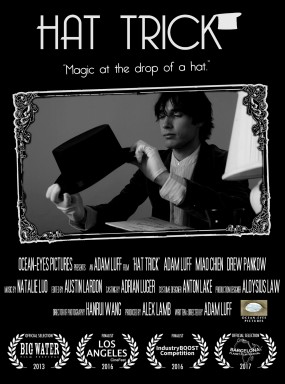 In June it reached the finals of the “Best Score” category at the Los Angeles CineFest, it was also a finalist at the IndustryBOOST Competition in November, and nominated for “Best Narrative Short” at the Barcelona Planet Film Festival in January 2017.

Also, Time for Tea (2012), a short I made right after Hat Trick, was selected for the 2016 Just A Minute Festival and most recently has been selected for the first annual Slumberjack Film Festival this coming March.

However, the most prolific achievement goes to one of my recent films, Nurture of the Beast (2016), a sci-fi horror micro short (running at just under 3 minutes) which I filmed with actor and childhood friend, Tom Brumpton. 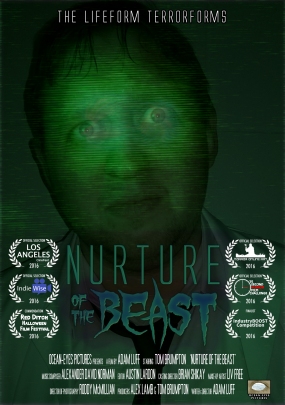 Although it didn’t make the Red Ditch Halloween Film Festival, the judges enjoyed it enough to give it a Commendation laurel. Afterwards, I heavily edited the film down to just 15 seconds and was accepted into the 15 Second Horror Film Challenge last October.

In 2016 I also spent time traveling, mostly for filmmaking such as attending events in London. I also went Germany to attend the Berlinale European Film Market back in February. 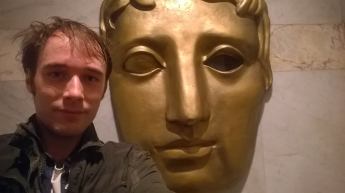 Photo provided by and used with permission from Adam Luff

However, the biggest venture (which actually has nothing to do with film) was traveling to the Philippines in March, specifically Manila during Holy Week. I’ve never been to Asia before and this was my first real experience that far in the East, so for the first time ever, I truly was a minority. I loved my time there. The country has some fantastic landmarks such as the Taal Volcano, an interesting culture and history, nice weather, and the most delicious cuisine on the planet. 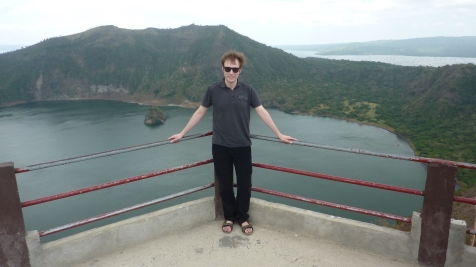 I have plans to head back to Germany for this year’s European Film Market in mid-February. I’ve also reached out to production companies and I’m currently booking appointments with them.

Back in June, I joined the Writers’ Guild of Great Britain and went in a slightly different direction by writing manuscripts for children’s picture books. Writing light-hearted, family-friendly stories is something I’ve always enjoyed, and is probably why I’m fortunate to have the success with Hat Trick and Lunar Art which are for family audiences.

This new path got me thinking about other mediums such as writing for television, theater, and radio. Much like wanting to write for animation is the next step from writing for live action, I’ve always wanted to have variety in my work, so I aim to spend 2017 building up a portfolio of different writing samples.

Currently, I have short scripts and a couple of feature length scripts–some for live action, some for animation–and some children’s picture book manuscripts. I’ve begun writing spec scripts for television and if I think of the right concepts, scripts for radio and theater will also be in the cards.

So there you have it; it was a busy year for me in filmmaking, and I can honestly say I’ve learned two things:

– Have close friends that are on a similar path, even if it’s just one partner in crime.
I feel that sums up the past year and the year ahead perfectly. My previously mentioned friend and actor, Tom Brumpton, is that person. Although he acts and I write, we’ve both taken this journey in the past year, from filming together to going to Berlinale and other events. It’s hard to find people that not only have similar goals, but people that are also willing to commit to the long, harsh and sometimes tedious process of paying dues. Many underestimate it.

– Don’t overwhelm yourself with your dream/career path.
I’ve been giving my all to this: writing, submitting film festival applications, emailing production companies and agents, going to events, etc. Naturally, it can sometimes take its toll, and you think, “Is it worth it?” Tom was wise enough to tell me to take a break from it now and then. After thinking about it, I added Candy Crush to my phone, simple as that! Since then, I’m on it in between writing scripts/applications, and it helps to take my mind off things and just relax. Maybe a goal in 2017 is to not get too addicted to Candy Crush, since I have Berlinale around the corner, and I’m focusing on that for now!

Thanks so much for sharing your updates and lessons with us, Adam, and congrats on all your success! We wish you the best in the years ahead. Readers, you can check out Adam’s work on his website and IMDb page, or connect with him on LinkedIn and Twitter.

Be sure to comment below – How have you done on your goals in the past year? What are you celebrating?

1 thought on “4 Steps to Accomplishing Your Goals – Adam Luff’s Story: “Have Friends on Similar Paths””